ISSUE 1. LACK OF INFORMATION FOR THE PATIENTS
Currently advantages of autologous reconstruction are getting more and more known by patients. Most women are now well informed and they then become the strongest advocates of the best treatment for themselves. Amazingly some of them are still not told that DIEP reconstruction can be an option or even worse they are informed that LD flap from the back which sacrifices functional muscle is as good as a DIEP flap from the abdomen which allows us to preserve muscle function.

ISSUE 2. INMEDIATE RECONSTRUCTION SURPRISINGLY SEEMS TO HAVE LOWER SATISFACTION RATES
The decision whether to offer immediate or delayed reconstruction is usually guided by the potential need for radiotherapy and of how aggressive the cancer is. Immediate reconstruction offers cosmetically the best possible result but unfortunately many of these patients are less satisfied compared to women who have had to live without a breast before they get their reconstruction done. It is a paradox, but it makes me think sometimes that the most important outcome of breast reconstruction is a patientâ€™s satisfaction and somehow we miss this point giving them the best possible result but with lower satisfaction rate.

ISSUE 3. DISADVANTAGES OF INMEDIATE â€“ DELAYED RECONSTRUCTION WITH EXPANDER IN IRRADIEATED FIELD
I am seeing in my breast reconstruction work a large volume of patients who had so called immediate-delayed breast reconstruction where an expander was inserted immediately after mastectomy to provide the patient with certain volume while awaiting the final reconstruction. Patients are usually told that it is better than being flat. Unfortunately it is well known that if patient will have radiotherapy there is very high chance that she will end up with hard and painful lump instead of anything looking like breast because of developing capsular contracture in irradiated field. An expander in this case does not substitute the breast but creates pain, aesthetically unacceptable deformity and impossibility to fit the external prosthesis. The patient ends up lopsided and with difficulty of fitting in external prosthesis because of expander on her chest. These patients appreciate final outcome of reconstruction with their own tissue more than anybody else after living for a while with encapsulated expander.Â  From an aesthetic point of view, in these cases I am rebuilding the breast using partially expanded skin which does not provide the volume of the other side, therefore the best outcome of their reconstruction still looks worse than the result when the breast is rebuilt as a single unit from the flat chest. (See the Figure 1). Therefore in my opinion insertion expander as temporary reconstruction in patients who will have radiotherapy provides more disadvantages when advantages. Even if it is â€œconvenientâ€ to be able to tell the patient â€œyou will not wake up completely flatâ€ we should think about what it will bring to this woman for next year or two until she will be having final reconstruction.

ISSUE 4. WHEN BREAST FAT GRAFTING IS INDICATED?
Lipofilling is a relatively new technique, which is becoming increasingly popular. It is well known that fat graft loses about 40-50% of its volume in a first 6 – 12 months after the surgery. It is also well known that only certain volume of it can be transplanted in a single procedure otherwise it will not be vascularized and will not survive. There are publications from mostly the same few authors in the world claiming that the breast can be completely rebuilt with fat grafting. In my experience some of these patients came to my clinic after having multiple general anesthetics for repetitive fat graft procedures and the result was not even close to looking like a breast. Considering lack of strong evidence in the literature I currently do not recommend to my patients fat graft as a technique to rebuild the entire breast. However I feel lipofilling is very useful for small secondary adjustments to improve fullness of upper pole or to give a bit more volume to reconstructed breast after reconstruction with DIEP or TUG flaps.

Using fat grafting to resurface defects after wide local excision is not something that makes me feel at ease. There is ongoing broad research regarding safety of fat grafting. No strong evidence was provided against fat transfer to breast tissue with previous history of breast cancer, neither there is enough evidence to prove the contrary.Â  Injecting stem cells to the irradiated breast tissue after wide local excision knowing that there is always risk of recurrence is very different from injecting it to the area of complete mastectomy where no breast tissue was left.

ISSUE 5. NEW EXCITING HORIZONS – JOINED BREAST RECONSTRUCTION AND LYMPHOEDEMA TREATMENT.
Following mastectomy and axillary lymph node clearance for breast cancer it is not uncommon for the woman to develop lymphoedema of her arm on the side of the cancer. The exciting news is that now it is possible to perform an operation combining the breast reconstruction using tissue taken from abdomen (DIEP flap) with the restoration of removed axillary lymph nodes using vascularized lymph node transfer (LNT) from the groin in order to simultaneously rebuild the breast and treat the lymphoedema. The lymph nodes are transferred to the area affected by lymphoedema to restore lymphatic outflow. The blood vessels of the lymph nodes are joined under the microscope to recipient vessels. This allows the preservation of blood flow to the lymph nodes ensuring their survival in the new location. The newly transferred lymph nodes stimulate growth of new lymphatic vessels thereby improving the lymphatic outflow circulation. If LNT is not enough additional lymphatico-venular anastomosis (LVA) is performed small through 2-3 cm incisions, which are made on the skin of the patientâ€™s extremity. The surgeon then looks for viable lymphatic vessels, which are generally less than 1 mm in diameter. These tiny channels are then connected under a high magnification microscope to very small veins using sutures, which are smaller than the human hair. This procedure creates new pathways, which then allow lymphatic fluid that has accumulated in the obstructed lymphatic system to divert into the venous system bypassing the obstruction. 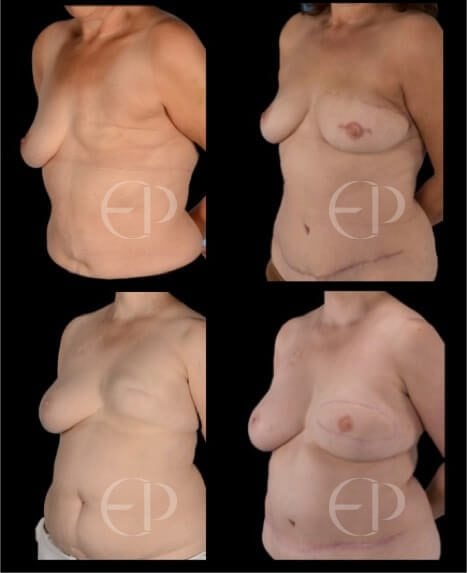 Patient 1.
Patient had mastectomy and later on her breast was rebuilt with tissue from her abdomen (DIEP flap). No expander was inserted and all of the breast was reconstructed as a single unit with abdominal tissue with very satisfactory cosmetic outcome.

Patient 2.
Patient had expander inserted after mastectomy, which became painful, displaced and encapsulated, causing distress and discomfort to the patient for the long time. As a consequence of insufficient expansion there was no possibility to expand the skin enough. Final result after reconstruction with DIEP flap is good, but the flap skin is inserted in the middle of the breast as opposed to the case 1.

WHAT DO ELENA'S PATIENTS SAY...

Elena was recommended to me and as soon as I met her I felt entirely comfortable. Her explanations made sense in terms of expectations. Having made the big decision I did feel nervous but had absolute trust and confidence in Elena. I knew I was in the best hands. Elena's team is so supportive, my questions were answered with patience and understanding. My care at the McIndoe Centre was excellent. I am five weeks post op for abdominoplasty and liposuction and last week. Quite amazing to see the before and after pictures! I am so pleased that I was fortunate enough to meet Elena and have no hesitation in recommending her.

I have been both physically and mentally uncomfortable in my body since I was 12. I was born with ‘breast mutation’ and I first had surgery to correct this through the NHS at 16 years old. The surgery I have had with Elena, 17 years later, has removed the NHS implants, one of which had ruptured, and completely altered the shape of my chest. By doing this she has made me look and feel like a woman for the first time in my life. She is at all times quietly kind and fiercely adept. A true artist. She has surrounded herself with the most wonderful team and I cannot thank them all enough for the new lease of life that I have been given.

I have been self conscious for the whole of my adult life and I cannot express how much this surgery&nbsp; has changed things for me. Both mentally and physically. I highly recommend Elena. She supported me throughout my journey from start to finish. Elena is very particular which for me is really important. Elena really took care of me from initial consultation right through to surgery and aftercare.My scaring is minimal and I am absolutely over the moon with my results. Thank you Elena!

Elena is an OUTSTANDING surgeon. I had PIP implants and was looking to have them changed. I knew Elena was the surgeon to help, she put me at ease and explained my options. The lovely ladies in her office were helpful, I wanted to get sorted asap, when an alternative date was available contacted me straight away. I received outstanding care from start to finish from Elena, her team and the hospital.&nbsp; The aftercare is amazing, nothing is too much trouble, can call any time. I was so relaxed, I knew I was in great hands.&nbsp; The final results are fantastic. Elena has worked magic and I couldn’t be happier.&nbsp; I’m so glad I found her. I can’t thank her and her team enough.

Had surgery with Elena in September, I was extremely anxious about the whole thing, but Elena and her whole team, from admin to the hospital staff were amazing with me and reassured me throughout my journey. I can not recommend Elena enough, and she has changed my life for the better! Already saving for my next operation with her!